Married at Last~ Damon and Shannon 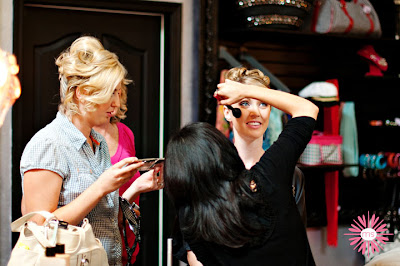 Damon and Shannon were finally married at Encanterra Country Club . What a beautiful wedding day it was. A little hot, but not to bad. This was my first time at Encanterra, let me say this ~"amazinggg". Shannon and her girls had their hair and makeup done at Dolce in Chandler. Damon and Shannon met by chance. Shannon's roommates worked at a bar in Tempe and she would go hang out with them while they worked. While Damon worked security at this same bar, he also would go play Texa's Hold'em there. One night Shannon and her friends were all getting together for her brothers 21st birthday. Just so happens that a mutual friend had invited Damon along, in hopes of setting him up with someone entirely different then Shannon. Come to find out, Damon had a crush on Shannon and was surprised to see her there that night. Even though he was nervous, he worked up the courage to talk to her. Needless to say he was not interested in anybody else. The two have been together ev
2 comments
Read more
More posts