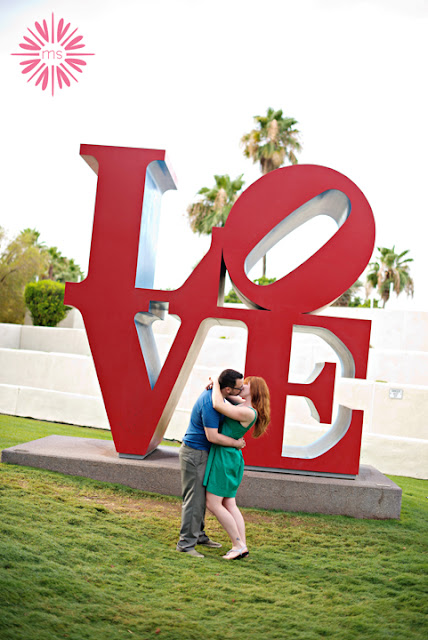 This LOVE statue never gets old!!  Kevin and Allison reside in California but are getting married here in AZ in April 2013.  They were in town during the month of July, so hot or not that is when we were going to take their engagement pictures.  This would mark the fist time for me meeting this lovely couple in person and I think we are a good pair.

They have a fun little love story that I will let Allison share in her words.  Simply because she is better at it then me.
Overcoming all rationality, common sense and logic, Allison and Kevin will marry on April 4, 2014.
It’s the love story that almost never was.
A series of oddities landed both in El Dorado, Ark., where they met and almost immediately began to butt heads over editing styles at the local newspaper. Kevin, an editor, and Allison, a reporter, frequently had it out over language utilized in her stories – a continued feud that came to head one night over the word, “superfluous.”
Despite the following months of disq…
Post a Comment
Read more
More posts